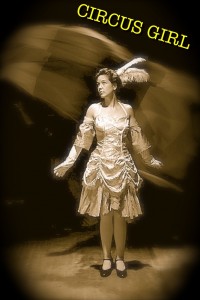 The Hat Tree Theatricals will premiere Circus Girl, their first play, at the Museum of Human Achievement June 6-16.

Rocky Hopson Tour Guide with Austin Overtures has written and is directing this enchanting and gritty new play. Circus Girl embarks on an epic journey through the tragic and beautiful reality of 1890s America.

Circus Girl takes you on a journey through America during the 1890s—from Kansas City to Chicago to Denver. It is the story of Circus Girl, a young performer who has lived in the circus or vaudeville her entire life. She knows very little about the outside world, and suddenly has to fend for herself in rapidly changing and precarious surroundings. Much like our present decade, the 1890s were a time of exciting innovation as well as economic crisis and uncertainty: New technologies like the recording of sound and film changed the way people perceived the world and themselves in it.

The Chicago World’s Fair took place in 1893 and was considered the biggest event in human history. On the flip side of that was the Panic of 1893. The railroads had overbuilt and went bankrupt. The banks closed. The country was in chaos. —Amidst this upheaval Circus Girl is out of a job and left alone. She has to adjust to her new environment or be sucked into the harsh reality of a country in turmoil.